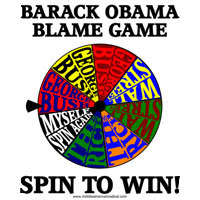 As a handful of the lawmakers on the sputtering joint Congressional committee charged with drafting a deficit reduction package met for what seemed like one final time, the White House said yesterday that only Congress could have produced a solution, while Republican presidential candidates moved to frame the committee’s failure to meet its deadline as a lack of leadership by President Obama.

Already some Republicans were saying Monday that they would try to spare the massive and automatic cuts to military spending that has been triggered since Congress couldn't agree on a deficit reduction plan.
Optimism was never that high on the panel would ever succeed, but stock markets were still dropping at midday, with stocks off sharply as bond yields fell.
At the White House, where the president signed legislation intended to spur the hiring of veterans, Mr. Obama urged lawmakers to get back to work on economic issues in a spirit of bipartisanship, but made no direct reference to the collapse of the deficit talks over the weekend and yesterday— even though some of the legislators involved were attending the signing ceremony.


The White House press secretary, Jay Carney, pointedly noted that the responsibility for getting a deal belonged to Congress, not the White House. First Blamer
“They should do the right thing and come together,” Mr. Carney said. “From the beginning of this process, what the Congress needs to do to get this done has been obvious to everyone.”
At a campaign stop in New Hampshire, one of Mr. Obama’s chief Republican rivals, Mitt Romney, said Monday that what was most disappointing about the panel’s failure was “that our president has had no involvement with the process.”


“I find it extraordinary that there would be a committee with such an important mission as finding a way to provide fiscal sanity in America, and with the penalty, if that fiscal sanity is not found, of a $600 billion cut to our military,” Mr. Romney said.
He added that the White House should promote legislation that would hold the military out of a set of automatic cuts, known as sequestration and divided between security and domestic programs, that are set to trigger in 2013 unless some other resolution is devised.

In a speech Monday, Newt Gingrich, another Republican candidate for president, called the failure of the committee “good for America.”
While Congress is on break for the Thanksgiving holidays, many members, especially Republicans, will turn their attention to the looming Pentagon cuts. As part of the legislation written to raise the debt ceiling earlier this year, a failure of Congress to reach a deal by the end of the year would result in $1.2 trillion in automatic spending cuts in domestic and military programs over 10 years, starting in January, 2013 — after elections that could reshape the Congress and perhaps replace the president.


“We need to more appropriately allocate spending reductions,” Senator Jeff Sessions of Alabama, the ranking Republican on the Senate Budget Committee, said in an interview. “Congress could alter the sequestration. I am hoping for that.”
On Monday, several members from both parties met in the office of Senator John Kerry, a Democrat from Massachusetts and a committee member, at his behest, along with Senator Jon Kyl of Arizona, a Republican member.


As he left the meeting, Senator Max Baucus, Democrat of Montana and chairman of the Finance Committee, said: “We are working as hard as we can. We are continuing to meet.”
Mr. Baucus said panel members were discussing a “new idea” floated by Senator John Kerry, Democrat of Massachusetts. Mr. Baucus declined to give details. Aides to committee members said the discussions had not narrowed the vast differences between the two parties over taxes and entitlements.


Senator Baucus said, “Both sides are feeling angst, more angst, at the possibility of no agreement, so they should work harder and more creatively.”
The Republicans were Representative Fred Upton of Michigan and Senators Jon Kyl of Arizona and Rob Portman of Ohio. The Democrats, besides Mr. Baucus and Mr. Kerry, were Representative Chris Van Hollen of Maryland and Senator Patty Murray of Washington, a co-chairwoman of the panel.
While the meeting began as a bipartisan affair, the Republicans left the Democrats to ponder their fate alone.


With the apparent collapse of the deficit reduction committee, Republicans in Congress were looking for other ways to rein in federal spending. Some House Republicans have discussed the possibility of seeking a vote on deficit reduction proposals advanced in the last month by Republican members of the committee. While such proposals would have no future in the Senate, they would give House Republicans an opportunity to show their commitment to fiscal restraint.
In the next month, lawmakers face deadlines to deal with several pressing issues: extension of a payroll tax holiday, extension of jobless benefits for the long-term unemployed, a 27 percent cut in Medicare payments to doctors and relief from the alternative minimum tax.
Items on this list carry big price tags. When Congress addressed them last year, the Congressional Budget Office said the temporary reduction in the payroll taxes would cost more than $110 billion, while the temporary extension of jobless benefits cost $55 billion and the remedy for the alternative minimum tax cost more than $130 billion. Shielding doctors from pending cuts in their Medicare fees would cost at least $20 billion to $30 billion.
Republicans in both houses said they would insist that Congress find ways to offset most of these costs. Otherwise, they said, the upshot of a year focused on deficit reduction could be an increase in the deficit.

Senator Patty Murray, Democrat of Washington, the deficit committee’s chairwoman, and Representative Jeb Hensarling, Republican of Texas, its chairman, were expected to announce later Monday in a news release their failure to reach an agreement after 10 weeks of negotiations.
Although stocks on Wall Street traded sharply lower this afternoon, some analysts said that it was Europe’s debt crisis, not America’s fiscal impasse, that was depressing sentiment.
Yields on 10-year Treasury bonds, in fact, were down to about 1.95 percent, while prices were up, a sign that investors continue to see assets like Treasuries as safe havens.


In Europe, on the other hand, interest rates on government bonds in the countries seen as most troubled, Italy and Spain, rose to near record levels, and Moody’s Investors Service warned that France’s top credit rating was vulnerable.

Representative Rob Andrews, Democrat of New Jersey, reminded an interviewer on CNBC that some spending cuts were already in hand from the summer’s negotiations, others might take place automatically.
“Remember that there’s a trillion or two of spending cuts now locked in when the committee fails,” he said. “Now, there’ll be an effort to repeal that lock-in, but I think the repeal will fail. And therefore, we’ll get another trillion-two in spending cuts, which is not a bad thing.”


Trying to sound hopeful, Mr. Van Hollen, a Democratic member of the panel, emerged from the Kerry-Kyl meeting on Monday and said, “We’re just having last-minute discussions.”
The White House watched as the congressional super-committee failed on debt and deficits as was exspected.

He lamented the finger pointing and the "blame game" in Congress and said lawmakers should make bold moves to solve big problems.

Carney said the American people are demanding that Congress be accountable.
Meantime, Carney rejected criticism that President Obama has been "disengaged" from the debate over deficit cuts.

The super-committee confirmed the failure to strike a bipartisan deal on more than one-trillion dollars in spending cuts over ten years.

That failure will trigger sweeping, across-the-board budget cuts, beginning in 2013.
Half the cuts would be in national security, including defense.


Defense Secretary Leon Panetta has warned of devastating consequences. Republicans and Democrats on the super-committee have been stuck in familiar territory, unable to find agreement on tax hikes or cuts in Social Security and Medicare.

If the supercommittee fails to reach agreement by tomorrow, $1.2 trillion in draconian cuts will go into effect in 2013 across all government departments, including defense. Some lawmakers have called for a reconfiguration of the cuts to spare the Defense Department.

Republicans and Democrats must stop blaming each other for the congressional supercommittee's impasse, the White House said. "This committee was established by an act of Congress. It was comprised of members of Congress. Instead of pointing fingers and playing the blame game, Congress should act, fulfill its responsibility," White House spokesman Jay Carney said Monday during a media briefing.

Earlier, Boehner, R-Ohio, blamed Obama for the panel's failure to come to agreement. The Speaker's office distributed a memo Monday that says the supercommittee "was unable to reach agreement because President Obama and Washington Democrats insisted on dramatic tax hikes on American job creators, which would make our economy worse."

Carney laid blame on the Republicans deciding they are "unwilling to do what the American people say they believe should be done, which is ask the very wealthiest Americans, millionaires and billionaires, to pay a little bit extra so that we can achieve the kind of deficit reduction and long-term debt control that we need."

On the stump in New Hampshire, former House Speaker Newt Gingrich said the failure of the committee would be good for America. Gingrich, among those seeking the GOP presidential nomination, said Monday he thinks the country's debt problem can be solved through the regular work of Congress.

During his speech at Rivier College in Nashua, Gingrich did not mention the government shutdown that occurred while he was speaker in the mid-1990s came after he and President Clinton failed to resolve a budget impasse.

Labels: Nation in Trouble, The Black Conservative, The Debt Crisis