I was in the chair getting my head shaved on Wenesday when my barber brought up the current back and forth in Washington on the debt limit. He wanted to know what most people want to know - why can't the Congress get its act together and cut a deal.
My barber is a transplant from Washington, D.C., so he's no stranger to the political people who come through his door from time to time. 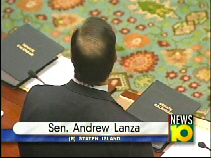 He absolutly was not ready for my response. "Rod," I said. "Think about it. You see people every day who don't come in for a hair cut until they absolutely have to."
Yes, he said, readily acknowledging that people don't like to be poked and prodded with sharp instruments around their face and head, until they absolutely positively have to seek a barber’s skill.

"So why should the Congress be any different?" I asked.

It doesn't make their current battle over the debt limit any more acceptable, but it is a reminder that the Congress isn't too different from ordinary people.


Thursday brought no real change in the debt limit debate in Congress, as lawmakers returned home after a long day in chambers in Washington, D.C. 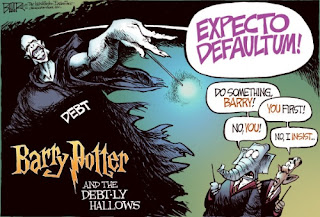 The White House did announce a veto threat against the "Cut, Cap & Balance" bill from Republicans, which was voted on Tuesday in the House, belittling it as "an empty political statement."

Neither setting arbitrary spending levels nor amending the Constitution is necessary to restore fiscal responsibility," the White House statement read, opposing both Cut, Cap & Balance and a Balanced Budget Amendment, for which I take as Obama’s way of spending us into non-existence. This unfortunate veto threat should make clear that the issue is not congressional inaction, but rather the President’s unwillingness to cut spending and restrain the future growth of our government.

So, both sides remain in their corners. No one is really reporting any headway on the budget and debt limit, making someone like me wonder about what's next, like, will we default, or take the obvious way out and raise the debt ceiling.

Is this just the final series of partisan political attacks from both sides, which has now given way to deal making on Capitol Hill and at the White House?


Or have we entered a new political realm, where things really do go off the tracks?﻿
﻿
It reminds me of the story Sen. Jesse Helms (R-NC) told on the floor a couple of times, where a friend of his goes by the National Archives, and sees the motto, "Past is Prologue."
The guy asks his cab driver, what that saying means to him - and the cabbie responds without missing a beat.

"You ain't seen nothing yet."

Back to my barber for a final thought - he told me that I’m going bald. But instead of making a quick appointment to deal with it, I told him I’ll just keep it shaved as I have done since noticing “The Spot”.

Just like the Congress, where the motto often seems to be, "Why Do Something Now That You Can Do Later."