As If By Magic 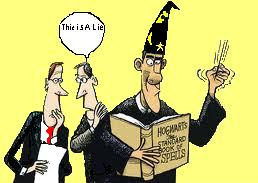 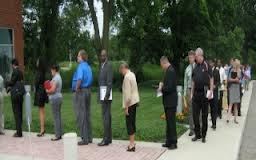 By the way, at a rate of adding 114,000 jobs per month, we wouldn't return to full employment until 2025.   114,000 jobs per month would be great...if we were living in the late 1950s.  We need twice that many just to maintain current employment.  A robustly growing economy requires job creation in the range of 300,000+.  Take a look at the number of jobs that were being created during the Reagan Recovery when GDP was 7-8%. 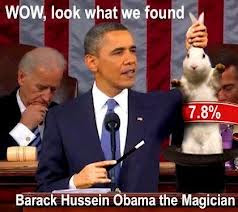 Based upon its most recent Household Survey, the Bureau of Labor Statistics has reported that the unemployment rate in the United States decreased from 8.1% to 7.8% in September.  This apparent improvement in our labor markets is deceptive for the following reasons:

1.  Two-thirds of the new jobs claimed by the Report (582,000 jobs) are part time jobs.
2.  Of the claimed 582,000 new part time jobs, only 268,000 are real.  The remaining 314,000 part time jobs are the result of a "seasonal adjustment" by the BLS.
3.  The BLS reported dramatic increases in seasonally adjusted part time employment in September of 2011 (483,000 jobs) and September of 2010 (579,000 jobs) only to report significant decreases in such jobs in each of the following Octobers (419,000 jobs in 2010 and 480,000 jobs in 2011) with continuing decreases in November and December.  It is therefore reasonable to expect that the increase in part time jobs this year and the resulting improvement in the unemployment rate is also temporary.
4.  The U-6 unemployment rate, which is the broadest measure of unemployment, in that it includes among the unemployed those persons who are working part time but would rather be working full time, was unchanged in September at 14.7%.