Libya Rebels Say Any Cease-Fire Must Include Freedoms

﻿
﻿
Libya’s rebels will accept a cease- fire with Muammar Qaddafi’s forces if their demands for freedoms are met, said Mustafa Abdel Jalil, head of the rebel National Transitional Council, during a news conference televised today from their stronghold of Benghazi.

The rebels are seeking a prisoner swap with Qaddafi’s forces, Abdel Jalil said in the joint briefing with a United Nations special envoy who arrived in the eastern city today.

The anti-Qaddafi fighters captured 42 members of Qaddafi’s military and handed them back to their families in the east, the rebel leader said.
﻿
﻿
U.S. aircraft will remain on standby as NATO takes over multilateral operations in Libya and the coalition considers its future role there, Defense Secretary Robert M. Gates told a Senate committee yesterday.

U.S. military aircraft are still available to NATO in the next few days until the organization formally takes control of military operations over Libya, Gates told the Senate Armed Services Committee. After that, the U.S. fighter jets will remain on standby in case they are needed again, he said.

Gates and Navy Adm. Mike Mullen, chairman of the Joint Chiefs of Staff, earlier appeared before the House Armed Services Committee in what was a full day of testimony about the U.S. role in Libya.

Coalition forces had to halt air operations over Libya due to bad weather for the past two days, causing rebel forces to retreat from areas they’d gained since operations began March 19, Mullen said.

Gates described the U.S. military mission in Libya as an emergency prompted by Libyan leader Moammar Gadhafi’s intent to use his military against civilians protesting for his ouster. Without intervention, he said, the situation would have led to thousands of deaths, hundreds of thousands of refugees and destabilization across North Africa.

“That part of our mission is complete and successful,” Gates said.

More than 20 nations, including several Arab countries, are participating in the NATO coalition -- some publicly, some not -- in different ways to enforce U.N. Resolution 1973 that allows for the no-fly zone, Mullen said. The coalition, he said, was able to move fast to prevent a disaster because of U.S. relations with those European and Middle Eastern nations.

The coalition has greatly diminished Gadhafi’s military air capabilities and many of his ground assets, the chairman said.

“My understanding is that focus will not diminish under NATO leadership,” he said.


The coalition continues to seize Libyan assets around the world, while signing on more partners, Mullen said. Swedish officials were the latest, having this week agreed to send eight aircraft to the effort, he said.

The coalition is considering whether and how to give more support to rebel forces, Gates said.

“A decision about support to the opposition is clearly the next step,” he said. “I think all members of the coalition are thinking about that at this point.”

A major consideration for the coalition is that not much is known about the rebels.

“We know a handful of the leaders,” Gates said. “But other than that, we really don’t know much about what I think is disparate, disaggregated opposition to Gadhafi.”

The issue is more complicated than simply arming the rebels. What the opposition really needs, Gates said, is organization, training, and command and control -- something he said likely requires coalition forces on the ground in Libya, which Gates and President Barack Obama said they are not willing to do.

“There really is no critical mass to work with” among the rebels, Gates added.

Gates and Mullen rejected the idea that the military mission should be broadened to include regime change, although they acknowledged that is a political goal.

“I very much believe that the mission as currently stated -- to prevent a humanitarian crisis -- is the right mission at the right time,” Mullen said. “My experience with regime change is that it can be long and very, very indeterminate in its outcome.”

It may be that Gadhafi will be forced from power, possibly by an internal military coup, Gates said. Coalition forces “will continue to attack [Gadhafi’s] ground forces with no opportunity for resupply,” he said. “His military is going to face the question of whether they are prepared to be destroyed by air attacks, or if it’s time for him to go.”

After being repeatedly asked about broadening the scope of the mission, Gates said Congress must also consider financial realities. Congress has yet to pass the fiscal 2011 budget and has forced the department to operate under continuing resolutions since Oct. 1. Besides operations in Iraq and Afghanistan, Gates noted there are 19 ships and 18,000 service members deployed on a humanitarian mission in Japan.

“I acknowledge that I’m preoccupied with avoiding mission creep” in Libya, the secretary said. “But … we are in serious budget trouble with the ongoing CR. At a time when we are asked to do so much, this brings this issue home. I need help from the Congress. The Defense Department needs help from the Congress.”

At the same time, the secretary noted, there “are others who can fulfill nearly all of the role” in Libya, referring to the coalition.

Asked to characterize the rebellion in Libya, Gates rejected calling the situation a civil war.

“I think it represents a fairly broad-based uprising against an oppressive government,” he said. “A civil war suggests there are two established governments that have some kind of structure and are in conflict for power.”

The rebels’ core objective seems to be “getting rid of the government they’ve got,” the secretary said. “The principal challenge we are all going to face is what happens after Gadhafi falls.”

The United States and NATO “shouldn’t exaggerate our ability to influence that decision,” Gates said, noting that would be better left to the Libyans and others in the region.

“There are a number of possible outcomes here, only one of which is some kind of democracy,” he said. “My view is that the future of Libya -- the U.S. ought not take responsibility for that, frankly. There are other countries in the region that can participate in that, particularly with non-lethal aid.”

While oil prices surge today, giving a boost to energy stocks, but not helping much else. 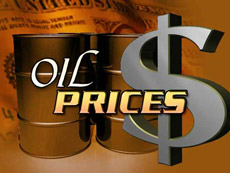 Two factors are combining to give oil prices a jolt. First, the situation in Libya is looking messier. Pro-Gadhafi forces have pushed back rebel forces, despite the coalition-imposed no-fly zone. In addition, reports of CIA and British operatives in Libya adds to the complexity of the conflict. Flickering unrest in Syria, Yemen and Bahrain are adding to concerns across the oil-rich Middle East.

Second, the dollar is facing another bout of weakness. All things being the same, a weaker dollar means you need more greenbacks to buy the same amount of stuff, in this case crude oil. Higher than-expected inflation readings in the euro-zone has solidified expectations that the European Central Bank will raise rates at its meeting next week, giving the euro a jolt against the dollar. The dollar is also lower against the yen, Swiss franc, Canadian dollar and Australian dollar.

Energy stocks are among the top performers in the market today. Hess is up more than 2%, Chevron is up 0.75%, Occidental Petroleum is up 1.8%, Marathon Oil is up 1%, ConocoPhillips is up 0.63%. Not all energy is rising. ExxonMobil is flat and BP is down about 1%.
Posted by Bobby Greer at 7:54 AM