Do you think Netanyahu "Caved" in the prisoner swap deal? 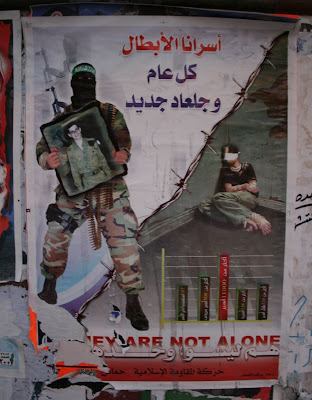 Prime Minister Benjamin Netanyahu is already thinking about the next abduction of an Israeli soldier, and he knows it will happen. Abduction warnings and attempts are virtually a daily occurrence, part of the routines of Israeli prime ministers over the decades. It's been that way in the five years since Gilad Shalit was abducted, and it will be that way after he comes home. And when the next abduction occurs Netanyahu will have to deal not only with the issue of the price to pay but also that of the proper response to the act itself.
There are two precedents he could follow: Shalit's capture in June 2006, when Israel's response was limited, and the July 2006 abduction of Ehud Goldwasser and Eldad Regev, which launched the Second Lebanon War. Netanyahu has no doubt about which approach he would take, and it's not the June 2006 model.
A few cabinet members, perhaps to assuage their own conscience, have promised that next time any prisoner exchange would be on a one-for-one basis. Netanyahu, in private conversation, has been more cautious in his language. He isn't ready to commit. He learned first-hand that real life is much more complicated than writing books about the fight against terror. Indeed, there is no job that is more sobering than being prime minister of Israel.


People who have spoken to Netanyahu in the past two days, while he was at his home in Caesarea, found him to be very relaxed. He is at peace with himself. This was the hardest decision he has had to make since reassuming the prime minister's post in 2009.


Just four hours before Tuesday's cabinet meeting, he wasn't convinced he had a majority for the deal. In retrospect, in light of the 26 to 3 vote in favor, that seems a little odd, but uncertainty prevailed in the Prime Minister's Office as evening approached. It appeared that around half of the Likud cabinet ministers would oppose the deal, in addition to all of the Yisrael Beiteinu ministers and one from Habayit Hayehudi, bringing the vote to a near draw. Ehud Barak, who had supported a deal from the moment he was appointed defense minister, assured Netanyahu that from the minute a prime minister decides to go ahead with such a move with full force and moral authority he will get approval even for decisions the right wing finds hard to digest. Barak was talking about Shalit, but he was probably also referring to future decisions that are late in coming, such as the resumption of negotiations with the Palestinians.


Barak faced a similar situation near the end of the Olmert government, and he has not a shadow of a doubt, when considering the record of Olmert and Netanyahu, who demonstrated leadership and courage and who got cold feet. In private conversations, Barak has said it is Netanyahu who has shown leadership. And without engaging in speculation about the psychological dynamic between them, perhaps Barak's presence helped Netanyahu to decide.


I personally think Netanyahu got beat on this deal? Israel doesn't need to conduct negotiations for captives. The army is permitted to go to war to save even just one person.


Differing opinions have been voiced by a number of leading rabbis regarding the exchange deal for Gilad Schalit.


The influential Rabbi Benny Lau of the Ramban Synagogue in Jerusalem’s Greek Colony argued in favor of the deal on Wednesday, saying that the changing geopolitical situation of the Middle East meant that the circumstances of Schalit’s captivity were such that his life was in certain danger.