When One Vote Is Not Enough 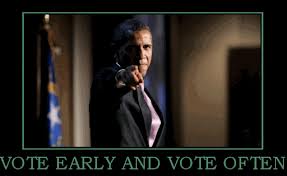 There was a time when the admonition “vote early” was accompanied with “and often.” No doubt many who used the expression had Chicago in mind, so photos of President Obama voting early in his hometown surely reminded old timers of the days when people really did vote early and often.

Although election watchdogs remain appropriately vigilant in their pursuit of voting fraud, and it is reasonable to believe that fraud is rare in American elections today, there is little attention being paid to the consequences of the nationwide trend to early voting. Is it a good thing? What impact is it having on our elections? Why are candidates across the political spectrum urging people to vote early?

Presumably the answer to the last question is that candidates believe it will give them an advantage. If supporters vote early, they are less likely to put it off and miss the deadline of Election Day. Get-out-the-vote efforts take boots on the ground; if you have more days to get people to the polls, you can cover more ground with the same number of boots. And most people are influenced by the last thing they’ve heard or read, so if you can get them to the polls before they have a chance to hear your opponent’s pitch, they might be more likely to vote for you.

Of course early voting was always possible, though it was known as absentee voting and you had to have a good reason to get your ballot early. Now over 30 states allow no-excuse absentee voting. In Florida, where I vote, everyone can vote early because we get our ballots in the mail almost three weeks before elections. Between the mailing of the ballots and Election Day, the candidates can’t know how you have voted, but they can know whether you’ve voted. That way they can hound those who haven’t mailed in their ballots and, if they’re reasonably sophisticated, leave early voters alone. Now there’s a reason to vote early. 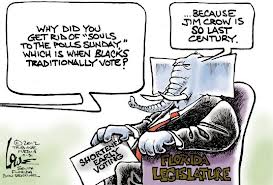 But voting early, as a routine option for all voters, does have real effects on elections. Proponents of vote by mail argue that one of those effects is higher voter turnout. It makes it easier for those who might have difficulty getting to the polls or taking time from work on Election Day. The state of Washington recently adopted the Oregon model, and polling stations are certain to become extinct in other states. A white paper published last year by Runbeck Election Services declares that “vote-by-mail is the past, present and future of democracy in America with ballots on-demand.”


No doubt they are correct. Early voting, vote by mail and, surely soon to come, electronic voting from our home computers is the future. But these trends come with costs as well as the claimed benefits.

Campaigns can no longer plan to peak on Election Day. They have to communicate their messages by the earliest date ballots are available and then keep it up right until Election Day. Sometimes candidate debates happen after some people have voted. A late October surprise might lead some who have already voted to wish for a second chance. It’s like being in a meeting where an important decision is to be made and some of the people have filled out their ballots before the discussion is concluded. 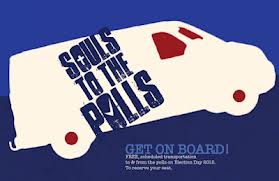 Early voting makes it more difficult for candidates to engage in serious debates about serious issues, and goodness knows we could use more of that. It puts a premium on strategy and tactics at the expense of an informed electorate and of democratic choices that reflect the contemporaneous opinions of the citizenry. We know from the volatility in the polls that voters’ opinions can change dramatically over the course of two or three weeks. Given Romney’s momentum, it’s not surprising that the Obama campaign has been particularly enthusiastic about early voting. 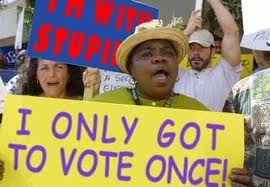 Early voting and vote by mail have another cost. They make Election Day less and less an important civic occasion and more and more just the day on which the votes are counted and the winners projected within minutes of the closing of the polls — which actually doesn’t happen in Oregon and Washington because there are no polls. What was once a solemn occasion celebrating the sovereignty of the people and the all-important right to vote has been reduced to maybe 30 minutes of waiting for the talking heads to declare a winner, followed by endless chatter about why things turned out as they did.
Increasingly, our embrace of early voting — warts and all — is part of the reason things turn out the way they do.
Posted by Bobby Greer at 9:35 AM