The Biggest Lie in American Politics 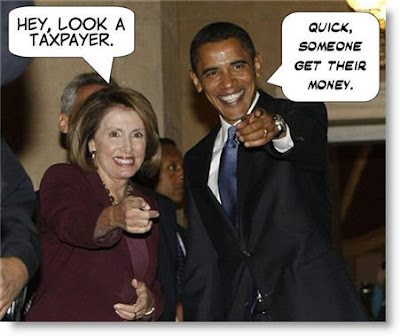 For decades, liberals have used "big business" as a bugaboo. Leftists say corporations are mean, heartless and cruel -- and what's more, they're inherently capitalist and conservative. When the economy tanks, liberals blame right-wing corporations; when the regulatory state fails, liberals claim that corporations have perverted the system.
In reality, corporations aren't conservative. They aren't capitalist. They're after the nearest buck. And when the nearest buck can be obtained simply by playing footsie with the federal government, big business becomes an emissary of the government.  An image of "General Motors" should have just popped into your minds eye.
To achieve its ends, the federal government employs two methods: the carrot and the stick. The carrot is special regulation and legislation benefiting certain businesses; the stick is heavy regulation designed to threaten businesses into compliance with federal mandates.


This last week provided proof in spades that big business has become a tool of the state. On Jan. 18, the Federal Communications Commission OK'ed the merger of Comcast and NBC Universal. In order to obtain permission for that merger, however, the FCC required that Comcast fulfill certain conditions: NBC and Telemundo will need to add 1,000 hours of local news; Comcast must subsidize low-income Internet access to the tune of $10 per month for 2.5 million low-income households; and most egregiously, Comcast must increase Spanish-language programming.
Comcast, seeking to confirm the $30 billion deal, went along with the regulatory blackmail. And so Comcast became an active part of the liberal program to reach out to Hispanics, the poor, and a news media that desperately needs government interventionism in order to survive.

In the same vein, Republican entrepreneur Donald Trump caved in to Democrats this week in an attempt to protect his business interests. While The Donald is no fan of President Obama -- he says that China is "laughing at our leadership" and that Obama is letting China "get away with murder" -- he willingly forked over a $50,000 check to Rahm Emanuel's Chicago mayoral campaign. No doubt Trump's Chicago real estate holdings had something to do with the contribution, not to mention that Rahm mysteriously re-appeared back on the Chicagos mayoral ballot.
﻿
When the government isn't taking away, it's giving. This week, President Obama conferred knighthood on Jeffrey Immelt, CEO of General Electric, by appointing him to head his Economic Advisory Panel. In the recent past, Immelt has vacillated between criticism and praise of the Obama administration -- last July; he said that Obama was anti-business, while in December, Immelt praised Obama's outreach to business. Immelt's wild swings between antipathy and peonage to the Obama administration closely mirror the administration's treatment of GE: In general, when GE gets a handout, Immelt is a happy camper.

This relationship has worked beautifully for the government. GE has utterly abandoned its capitalistic, entrepreneurial past. Instead, it has embraced the roller coaster ups-and-downs of government subsidization. Immelt doesn't believe that the main job of government is to keep the hell out of a company's way -- he believes instead that government should become a "partner" in crime. According to Washington Examiner columnist Timothy Carney, GE has spent $65.7 million on lobbying, outpacing its competition by leaps and bounds.

GE and Comcast aren't alone in their desire to cozy up to the federal government. Google, once an entrepreneurial superstar, now links arms with the Obama administration by pushing "net neutrality," a scheme designed to run its competitors out of business via government regulation. Like GE, Google has one of its own inside the Obama administration -- Andrew McLaughlin, Google's former top policy executive, is currently deputy chief technology officer of the Obama administration. He has already been called on the carpet for asking Google to use its power to help out his new White House buddies.


Welcome to today's corporate , where business takes a back seat to politics. The stock market now swings wildly based on Ben Bernanke's moods; the banking system teeters each time Barney Frank sneezes; titans of American industry scrape and bow for the scraps from Obama's dinner plate. Corporations are no longer capitalist but statist. Next time liberals cite the misdeeds of big business to complain about the ills of capitalism, inform them that big business is more a representative of government than it is of the free market.
Posted by Bobby Greer at 4:37 PM

Labels: State Of The Union Rebuttle, The Black Conservative