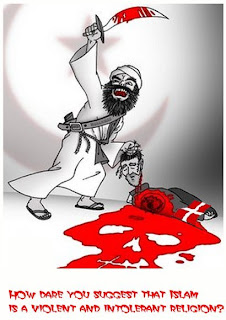 Did you know that Israeli Mossad agents murdered 22 people and wounded 80 more at the Coptic Christian Church of Saints George and Peter in Alexandria, Egypt, on New Year’s Eve? Neither did I. But all around the Islamic world, that's the story being told -- in yet another instance of Muslim denial of jihadist violence, and displacement of responsibility upon their favorite scapegoat, the Jews.
Iran's Press TV, an official organ of the Islamic Republic, claimed in an unsigned editorial that "the fresh plot by terrorists to target churches is an organized Zionist scenario aimed at creating a rift between Muslims and Christians." Lebanese Shi'ite leader Sheikh Abdel Amir Kabalan struck a tone so similar as to give the impression that a set of talking points were being circulated: "This terrorist act bears the fingerprints of Zionists who keep on targeting religious sites and are working to . . . sow discord between Muslims and Christians."

Nor did this paranoid and preposterous claim circulate only among Shi'ites. A Saudi Sheikh, Salman al-Awda, a member of Sheikh Yusuf al-Qaradawi's International Union for Muslim Scholars, made the same assertion about other recent jihad attacks against Christians in the Middle East: "These are tools in the hands of the Zionists, Israelis, Europeans, and Orientals, with the goal of damaging Islam." An Islamic cleric in Egypt itself, Abu Omar (Osama Hasan Mustafa Nasr), added in American involvement, Politicians jumped in as well. A political party in Lebanon, the Lebanese Popular Congress, opined that "what happened in Egypt, and what is happening in Iraq, Yemen, Sudan, and Lebanon, and what will happen in other Arab-Islamic countries, is all occurring within the framework of this hellish plot, whose components were carefully crafted in the Zionist-American Greater Middle East project." Former Lebanese Defense Minister Abd-al-Rahim Murad said the attack on the church in Egypt constituted "clear evidence of Zionist-Western attempts to target the national fabric of Egypt."

The internationally renowned Islamic scholar, Sheikh Yusuf al-Qaradawi, said slyly: "I fear that there may be a foreign hand behind this action, for it does not make sense for an Egyptian or a Muslim to be behind it. Perhaps a foreign hand is attempting to ignite sectarian strife."

Even one Middle Eastern Christian leader piled on: The Melkite Greek Catholic Patriarch Gregory III Laham declared several weeks ago that Muslim persecution of Christians in the Middle East "is actually a conspiracy planned by Zionism and some Christians with Zionist orientations and it aims at undermining and giving a bad image of Islam."

Amid all this, some voices of sanity did make themselves heard. Mamdouh Nakhla of Egypt's Al-Kalema Human Rights Center declared: "The crime is local and those who committed it are known . . . The Al Mujahedeen website threatens to repeat the attack in more churches. The site has addresses of churches and even how to make a bomb. Does security not know about it? Anyone who says that it was a foreign or Israeli plot is trying to play down the crime and is trying to clear those murderers of this massacre, and I consider them their accomplices."

And at least one Islamic leader was more honest than his colleagues. A Mauritanian Islamic cleric, Abu al-Mandhar al-Shanqiti, declared that the church attacks were justified according to Islamic law in light of claims that Copts were trying to convert Muslims to Christianity, as well as (unsubstantiated) allegations that Copts were holding two Muslim women against their will: "How should Sharia [Islamic] law view Coptic priests and Christians who proselytize in our country and kidnap our women? You should attack those who attack you, with a force that is equal to or greater than theirs."

But mostly the Islamic reaction to the jihad attack on New Year's Eve at the Church of Saints George and Peter was a new level of evasion, denial, obfuscation and finger-pointing. The vaunted moderate Muslims, on whom the West has placed so much hope and based so much policy, once again failed to do anything to restrain their violent coreligionists. And so amid the prevailing unreality, the only certainty for Middle Eastern Christians is that there will be more jihad attacks, claiming that "Israel's Mossad and the CIA are behind the attack in Alexandria."