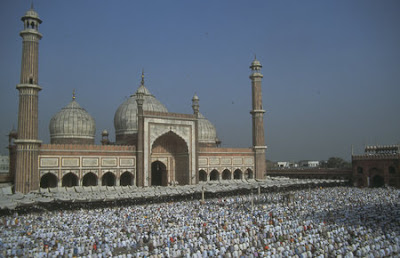 Egyptian President Hosni Mubarak has attempted to quell the unease in his country by announcing he will not run for a 217th term as President later this year.


Well, we see that it didn't work and the flames of dissatisfaction are nearly out of control in the streets. I think it’s no better than 30-70 the demonstrators will accept that. They understand, as you and I do, that Mubarak is hoping that, by the Fall, the ardor for change will have run its course and Mubarak will take that as a sign that the 80 million Egyptians want him to serve yet another term as President having been elected in yet another bogus process.

The Pew Forum on Religion and Public Life set out a couple of years ago to determine just how many Muslims there are in the world and where in the world all those Muslims are living.

The study begins with:

A comprehensive demographic study of more than 200 countries finds that there are 1.57 billion Muslims of all ages living in the world today, representing 23% of an estimated 2009 world population of 6.8 billion.

So, about one out of every four people on the planet is a Muslim.

The part which may be surprising to you is this: Only about 20 percent of all Muslims live in the Middle East and North Africa. The other 80 percent live somewhere which isn’t named, Saudi Arabia or Egypt.

The country with the most Muslims is Indonesia.

Of the 1.6 billion Muslims in the world, about 203 million of them live in Indonesia.

In fact, according to the Pew paper, Asia-Pacific (including places like Afghanistan, Pakistan, and India) is home to three times the number of Muslims as the Middle East and North Africa.

I’m not suggesting that Muslims living in Tennessee are looking for a reason to seize control of the Grand Ole Opry, but there are a lot of other places on the planet where Muslims are the underclass and it might not take much to ignite a brushfire.

Remember a couple of years ago when Muslim immigrants from North Africa decided that setting cars on fire in the suburbs of Paris was a good idea? They’re not going to cause the downfall of the Sarkozy government, but they can make things uncomfortable in the 6th Arrondissement if they want.
﻿ ﻿ On the other hand, if a significant number of the 1.7 million Muslims in the U.K. decide to go on a rampage it might bring down the already tenuous government of Prime Minister David Cameron.

Aside from mass demonstrations, the troubles in Egypt will also get al Qaeda cells in Yemen, Pakistan, and who-knows-where-all thinking about how they can use the distraction of a million people milling around in Egyptian squares to their advantage.

Maybe Mubarak’s offer will work. I suspect it will not, and he will have to up the ante by bringing an opposition leader or two into his government which would have been like Bill Clinton bringing Newt Gingrich into his Administration after the 1998 mid-terms.

Don’t get bored with this story just yet. It may have many more plot twists to go.


This WILL be CONTINUED
Posted by Bobby Greer at 7:30 AM