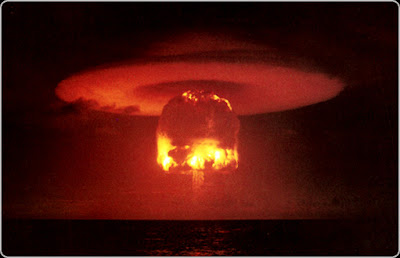 The Iranian government has produced a bone-chilling documentary that claims that Ayatollah Khamenei, President Ahmadinejad, and Hassan Nasrallah are talked about in Islamic prophecy as leaders who will wage war to bring about the arrival of the Hidden Imam, which the film says is “very close” to happening.


Reza Kahlili, a former member of the Iranian Revolutionary Guards who spied for the CIA and authored A Time to Betray last year, procured the entire film and says it was created by close associates of Ahmadinejad and was shown to top clerics two weeks ago. His chief of staff, Esfandiar Rahim Mashaei, is said to have played a role in its creation. Kahlili allowed FrontPage to view a shortened version of the film over the weekend, which he says the Iranian regime intends to distribute to mosques and Islamic centers throughout the region with an Arabic translation and is currently being shown to members of the Revolutionary Guards and Basiji.

The purpose of the film is to make the case that Iran is prophetically destined to lead the war against Islam’s enemies, which is as a prelude to the appearance of the Hidden Imam, also called the Mahdi, who brings the final victory for Islam and reigns over the whole world. It uses current events to argue that “the final chapter has begun” and the Mahdi’s arrival is imminent. Most disturbingly, it teaches that Khamenei, Ahmadinejad and Nasrallah are the individuals prophesied to make this happen.

The documentary claims that Supreme Leader Ayatollah Khamenei is the Seyed Khorasani talked about in the Hadith that leads a nation in the East (Iran) as “the preparer” for the Mahdi’s intervention. In July 2010, a senior Iranian cleric revealed that Khamenei had told close associates that he had privately met with the Mahdi and was told that he’d arrive before his time as Supreme Leader ends. Khamenei is 71 years old and widely understood to be in poor health, so the grand jihad that Khamenei believes he must command must come soon.

President Ahmadinejad is an End Times character named Shoeib-Ebne Saleh, the film states. He is appointed as the commander-in-chief by Seyed Khorasani (Ayatollah Khamenei). The speaker in the film says that this individual will “move” 72 months prior to the arrival of the Mahdi and will lead the recapturing of Jerusalem on “the threshold of the Coming.” It is unclear if “move” means a physical action by Ahmadinejad or if it means his coming to power in 2005. If it is the latter, then the regime believes the Mahdi is to appear by the end of this year.

Also mentioned is military commander called Yamani, who is to form the army of the Mahdi that will march to Mecca in Saudi Arabia. The film teaches that this is the leader of Hezbollah, Sheikh Hassan Nasrallah. These three prophesied Islamic leaders are to wage a war against the “Antichrist” and “the imposters,” which are said to be the United States, Israel and their allies, including Arab leaders. The current uprisings in the Arab world are viewed as the fulfillment of prophecy and confirmation that they are to wage this final war against the enemies of Islam.

The film states that the invasion of Iraq was foretold, as Imam Ali said that “they [the enemies of Islam] will conquer Iraq and through bloodshed create divisions in tribes” and “at that time, be ready for the reappearance of the last messiah, Imam Mahdi.” The Iranian-backed Houthi rebellion in Yemen is referred to as a “holy revolution” and the removal of Egyptian President Mubarak are also End Times events.

It also preaches that the death of Saudi King Abdullah will be a major sign that the destruction of Israel and arrival of the Mahdi are imminent. The film almost immediately states, “Whoever guarantees the death of King Abdullah in Saudi Arabia, I will guarantee the imminent reappearance of the Mahdi,” a not-so-subtle call for his assassination. The film later refers to his “uncertain condition,” as he is ill and 86 years old and his demise is not far off. Once it happens, it will be seen as a green light by the Iranian regime.

The rise of the Muslim Brotherhood is addressed as being “in accordance with the Hadith.” The Brotherhood may be Sunni, but this film states that Iran is theologically-required to ally with it. The ties between Iran and the Muslim Brotherhood are not the result of converging interests but of religious commandment. The film says that according to Islamic prophecy, revolutions will happen in the Arab world that rid it of foreign influence and result in a united front to “reconquer Palestine.” As stated, it is taught that Ahmadinejad will accomplish this. If the film reflects the private views of the Iranian leadership, then it is clear the regime believes it is now on the precipice of leading a coalition to destroy Israel.

Iran’s support of terrorism and pursuit of nuclear weapons must be viewed in this context. Ayatollah Mesbah-Yazdi, widely believed to be a close spiritual guide to Ahmadinejad, has written of the need to make “special weapons” of the kind only a few countries possess, a likely reference to nuclear weapons. In February 2006, a follower of Mesbah-Yazdi that is a cleric in Qom said that “for the first time…the use of nuclear weapons may not constitute a problem, according to Sharia” and it is “only natural” for Iran to acquire them. In October 2010, the website belonging to the Ministry of Intelligence and Security published an article by an advisor to the Defense Minister that said Iran must be prepared for nuclear war. “[I]f the United States launches an unconventional attack, Iran needs to respond with a nuclear strategy,” it said.

Luckily, a top seminary in Qom rejected the comparison of Ahmadinejad to Shoeib-Ebne Saleh after a clip of the documentary was aired on Islamic Republic of Iran Voice and Vision. However, the religious beliefs of the Iranian regime are not contingent upon popular approval, and Reza Kahlili told FrontPage that a portion of the complete video is devoted to showing clerical support for its message.

For about 10 minutes, the video lists the names of clerics, including very influential ones like Ayatollah Haeri Shirazi and former Revolutionary Guards chief commander Seyed Yahya Safavi, who affirm their belief that Khamenei is Seyed Khorasani. This isn’t propaganda, the regime really believes it,” Kahlili said.

The documentary produced by the Iranian government confirms that it believes a final grand war against Islam’s enemies, which will culminate in the destruction of Israel, is not something to be avoided, but something to be sought. Recent events are being interpreted by the Iranian regime as prophetic fulfillments confirming that this war is near and its duty is to lead it. This is not a belief system that the West can accommodate.
Posted by Bobby Greer at 10:12 AM