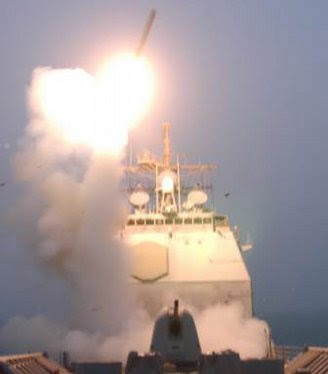 The Navy could run out of Tomahawk missiles after a fifth of the Navy stockpile has been used against Libya, sources disclosed yesterday.

Defense insiders say as many as 12 of the weapons have been fired from the hunter–killer submarine Triumph in the past four days.

If this is correct, the Navy will have used up to 20 per cent of its 64 Tomahawks in the opening salvos of the war, leading to fears that it is "burning through" its armory.

The situation could become an embarrassment for the Government if the submarine were the only vessel within range of a number of targets but could not fulfill the mission.

The submarines are stealthy and can loiter offshore unseen before going to depth to fire the Tomahawks.

The Block Four variant of the missile can travel more than 850 miles, can be retargeted in flight and can loiter above a target for more than two hours.

It is understood that plans are being made either to resupply Triumph or send another Trafalgar–class submarine to the Mediterranean as a substitute.

Triumph can carry up to 25 missiles or torpedoes. It is likely to have been loaded with as many as 20 of the long–range strike weapons. However, it is now likely to have used half its armory.

Questions have been raised about why the number of Tomahawks was not increased during last year's Strategic Defense and Security Review which highlighted the role for submarines to be used for "strike capability".

"At this rate we are using up five or ten per cent of our stock per day and soon it could become unsustainable," a defense industry source said. "What if the strikes go beyond a second week? We will simply run out of ammunition."

Several of the 64 Tomahawks are being serviced because their fuel and computers need to be regularly checked.

The Navy has also indicated that it could rely on the American fleet to provide emergency stocks of Tomahawks if they ran out.

A Ministry of Defense official said the Navy would still remain "poised to deliver missiles if it needs to".

He said: "As we take out static targets the number of opportunities to use the Tomahawk will decrease."

The battle to enforce the no–fly zone over Libya is costing the taxpayer millions of pounds a day.

The cost of the four–day operation to date is £28.5million, The Daily Telegraph has learnt.

The cost of putting four Tornado GR4 bombers, three Euro fighter Typhoons plus support aircraft into action is an estimated £3,216,000 a day. The Tornado costs £33,000 an hour to operate, including fuel, capital costs and crew training and the Typhoon costs £80,000 an hour.

The Storm Shadow missiles and submarine–launched Tomahawks cost £1.1million and £800,000 each.

Defense chiefs are said to be lobbying the Prime Minister to ensure that the extra costs are paid from the Treasury's reserve budget. "This is a huge issue for us," said a senior military planner. "Who is going to pay for this?"

The Government is paying almost £5billion a year for the 10,000 troops in Afghanistan.
Posted by Bobby Greer at 9:14 AM