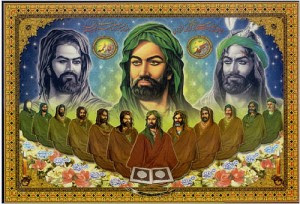 Question: Who is the 12th imam?


Answer: First of all, bear in mind that Iran is a fervently Shiite Islamic Republic, with a 98 percent Muslim population and 89 percent of those Muslims identifying as Shiite, according to the CIA World Factbook. Twelver Shiism is the largest branch of Shiite Islam, with about 85 percent of Shiite adhering to the belief in the 12th imam. Ayatollah Ruhollah Khomeini, father of the Islamic Revolution in Iran, was a Twelver. So is the current supreme leader, Ayatollah Ali Khamenei, and President Mahmoud Ahmadinejad.

Now, what does this mean? A series of imams was appointed to carry on the Prophet Muhammad's message, they believe, ranking above all other prophets except for Muhammad himself. The 12th, Muhammad al-Mahdi, is believed by these Shiites to have been born in present-day Iraq in 869 and never to have died, only gone into hiding. Twelvers -- not other Shiites or Sunni Muslims -- believe that al-Mahdi will return as a messiah with Jesus to bring peace to the world and establish Islam as the ruling faith across the globe.

The apocalyptic catch? The Mahdi is expected to appear when the world is wracked in utter chaos and war. Many Sunnis also believe that the Mahdi will come in such a judgment-day scenario, but believe that he has not been born yet.

The Twelver beliefs have raised concern in conjunction with Iran's steeped interest in furiously pressing forward with its nuclear program, combined with threats against Israel and the West. Critics of the Islamic Republic allege that Ahmadinejad and the supreme leader would even go so far as to hasten a nuclear showdown and cataclysmic strike -- perhaps an attack on Israel and inevitable retaliation -- to hasten the arrival of the 12th Imam. Ahmadinejad has even called for the reappearance of the 12th Imam from the podium of the United Nations General Assembly. During his speeches within Iran, Ahmadinejad has said that the main mission of the Islamic Revolution is to pave the way for the reappearance of the 12th Imam.


When NBC News' Ann Curry interviewed Ahmadinejad in Tehran in September 2009, she asked him about the Mahdi:
﻿
﻿
Curry: In your speeches, you pray for God to hasten the arrival of the hidden Imam, the Muslim messiah. Would you tell us, as I know you will speak about this at the general assembly, as well. What is your relationship with the hidden Imam, and how soon do you think before the second coming?

﻿ ﻿ Ahmadinejad: Yes, that’s true. I prayed for the arrival of the 12th Imam. The owner of the age, as we call him. Because the owner of the age is the symbol of the – justice and brotherly love prevailing around the world. When the Imam arrives, all of these problems will be resolved. And a prayer for the owner of the age is nothing but a wish for justice and brotherly love to prevail around the world. And it’s an obligation a person takes upon himself to always think about brotherly love. And also to treating others as equals. All people can establish such a connection with the Imam of the age. It’s roughly the same as the relationship which exists between Christians and the Christ. They speak with Jesus Christ and they are sure that Christ hears them. And responds. Therefore, this is not limited to us only. Any person can talk with the Imam.

Ahmadinejad: I have never said such a thing.

Ahmadinejad: I – I – I was talking about peace.

Ahmadinejad: What is being said about an apocalyptic war and – global war, things of that nature. This is what the Zionists are claiming. Imam…will come with logic, with culture, with science. He will come so that there is no more war. No more enmity, hatred. No more conflict. He will call on everyone to enter a brotherly love. Of course, he will return with Jesus Christ. The two will come back together. And working together, they would fill this world with love. The stories that have been disseminated around the world about extensive war, apocalyptic wars, so on and so forth, these are false.
Posted by Bobby Greer at 10:54 AM