Social Security and the Ponzi Effect 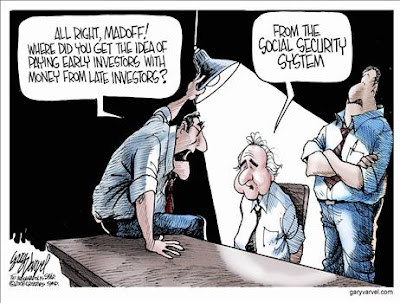 In 1935, President Franklin D. Roosevelt sold Social Security as a program in which employees would pay into a government fund that would invest their money over that person’s lifetime. Once that individual hit retirement age, the fund would, over time, return the initial sum plus the accumulated growth. The reality is that money-grubbing politicians immediately raided the flush accounts to bankroll big government. Social Security taxes on employee wages are transferred straight to the checks of current retirees, and the “fund” is just a pass-through account and past supluses were replaced with IOUs.﻿
﻿
Fifteen years earlier, Charles Ponzi had a similar idea. The Italian immigrant convinced thousands of Boston residents to hand over their wages in exchange for a guaranteed return. Instead of being paid over a lifetime, Ponzi promised 40 percent dividends within 90 days. The initial payouts were supposed to be backed by exchange-rate arbitrage involving international postage, but once the money began flowing, the planned trades never happened. As long as new, willing investors were at Ponzi’s door, he could make good on his payments. The Boston Post ended that by revealing Ponzi’s vaults had more IOUs than cash. The house of cards collapsed.

Today, the Securities and Exchange Commission (SEC) enforces laws meant to prevent this from ever happening again. As the agency defines the practice, “Ponzi-scheme organizers often solicit new investors by promising to invest funds in opportunities claimed to generate high returns with little or no risk.” That’s exactly what the Social Security law does when it guarantees seniors the full amount in benefits, no matter what happens with the markets. The SEC adds, “With little or no legitimate earnings, the schemes require a consistent flow of money from new investors to continue.” Thanks to the baby boomers hitting retirement, Social Security has more retirees receiving benefits than workers needed to meet payments. Consequently, Social Security was in the red last year - $49 billion more than came into the fund.

A Ponzi scheme always collapses. The question is whether the American people will elect a president who has the courage to rebuild FDR’s Ponzi scheme into something that can last.

In the Social Security system, the money you pay into the system gets immediately paid back out to the people who are currently getting Social Security checks. This arrangement came into being because of the way the system started. In 1935, when Roosevelt signed the Social Security Act into law, there were a lot of people who needed benefits (because of the Great Depression), but there was no money to pay those benefits with. The idea at the time was that people currently working would pay into the system, and their money would immediately go back out in the form of benefit checks. Each generation of retiring workers would get paid by the people currently working, and therefore the system would fund itself forever despite the fact that the system had no money to start with.

This clever idea worked great in 1935 (and for many years after that), but it is going to have a problem in the future for two reasons:

In 1935, there were many more people paying into the system than those receiving benefits. The ratio of workers to retirees meant that workers did not have to pay much into the system in 1935 to support retirees up through 1950, only 2% of income (1% employee, 1% employer) was withheld for Social Security, compared to 15.30% (7.65% employee, 7.65% employer) today). In the future, the retirement of millions of baby boomers will hurt the ratio -- there will be so many retired people that the working people will not be able to support them. If the population had grown steadily this would not have been a problem, but there is no good way for the design of the Social Security System to handle a population spike like the baby boomers.

Many people have become so used to the idea of a 401(k) plan (where your money belongs to you and grows to a large sum over time through investment compounding), that the idea behind the Social Security system becomes hard to swallow. Currently a worker pays 7.65% of his or her gross income into the Social Security system (with a cap at a gross income of around $70,000), and the employer pays another 7.65% for the worker as well. If you could take that 15.30% of gross income and invest it in a 401(k) plan for the same period of time, it would generate an immense sum of money based on historical returns -- far more than a person with average income (or greater) would get from Social Security. A retiree's Social Security benefit is calculated using a complex formula rather than an account balance, because there is no "account" in the traditional sense.

As the Social Security Administration's history of the constitutional question makes clear, even this may not have been enough to get the Social Security Act passed by the Supreme Court without a little bit of presidential intimidation. Prior to the Social Security case, Roosevelt threatened to “pack the Court” with additional justices more to his liking. Roosevelt’s plan failed but, as the SSA history notes,

The Court, it seemed, got the message and suddenly shifted its course. Beginning with a set of decisions in March, April, and May 1937 (including the Social Security Act cases) the Court would sustain a series of New Deal legislation, producing a "constitutional revolution in the age of Roosevelt."

In other words, the Supreme Court ruling validating Social Security's constitutionality isn’t exactly how any of us would like court rulings to happen. Nevertheless, as Rick Perry has noted, this is water under the bridge now. He isn’t (and shouldn’t be) seeking to re-fight a 65-year-old constitutional battle. But to think Perry’s constitutional claims are wrong is, well, wrong.
﻿
But now to the Ponzi comparisons. To be clear, these aren’t a Perry original. As Perry’s campaign pointed out, Romney himself wrote that Social Security resembles a “fraudulent criminal enterprise.” Which enterprise might he have been thinking of? Likewise, Senate Majority Leader Harry Reid called borrowing from the Social Security trust fund “embezzlement, thievery,” saying that if he had done this in the private sector “I could be criminally prosecuted by the district attorney.” So the Texas governor is far from alone in his comments.﻿
﻿

But most of those who refer to Social Security as a Ponzi scheme are not thinking intent so much as effect. What makes the Social Security/Ponzi references so common is the similarity in the way they are financed. In both cases, early participants receive payments, not from interest on their own investments, but directly from inflows from later participants. If you were describing the mechanics of how Social Security’s financing works, it wouldn’t be illogical to refer to a Ponzi scheme.
﻿

And, also like a Ponzi scheme, Social Security paid early participants incredible returns on their money, because they contributed to the system for only a few years but received a full retirement’s worth of benefits. A person who retired in 1950 received around a 20 percent annual return on the taxes he paid (which happens to be exactly the same return that Madoff promised to his investors). Put another way, that person received around 12 times more in benefits than he’d paid in taxes. That helps explain why Social Security became so popular: it was simply an incredibly good deal.

If you were born in 1950 and heard your grandparents say how much they liked Social Security, you’d be tempted to think you’ll get the same sort of deal. But you won’t: an average wage earner born in 1950 will receive around a 2.2 percent return from the system, which is less than what you could earn on guaranteed government bonds. A person entering the workforce today will receive only around a 1.7 percent return. In effect, Social Security’s reputation is based off a deal that it can no longer deliver. Whatever good it did in the past—and it did do a lot of it, in terms of reducing poverty and helping the disabled and survivors, in the process undercutting Perry’s claims that Social Security was “by any measure” a failure—it will do less of it in the future.

Similarly, like a Ponzi scheme, there really isn’t any actual investment going on with Social Security. While the trust fund has a $2.5 trillion balance it can call on to pay benefits, this fund won’t be of any help to the taxpayer. When Social Security goes to redeem bonds in the trust fund, the Treasury must raise taxes, cut other programs, or borrow the money—exactly the same steps as if there weren’t a trust fund at all. The trust fund records how much we have borrowed from Social Security but, as the Congressional Budget Office points out, “trust fund balances convey little information about the extent to which the federal government has prepared for future financial burdens.” While legally important, the CBO says, the trust fund has “little economic meaning.”


While the top Republican presidential candidates are trying to bash each other in debates with the club of Social Security, what they support is almost identical -- and mathematically impossible.
Social Security has, since its founding in the mid-1930s, been a system in which each generation of workers pays the benefits of older retirees. We don't fund our own benefits, we fund our parents' and grandparents' benefits, and expect the same from our children and grandchildren.

If the contributions of young workers went into their own private accounts rather than the Social Security coffers, there soon wouldn't be any money left to pay current recipients.

There are more debates coming up, and Republicans will talk about Social Security plenty. It would be good if the conversation were rooted in real-world solutions rather than politically expedient but mathematically impossible fantasies.
Posted by Bobby Greer at 1:14 PM