There Are No Jobs, Go Home 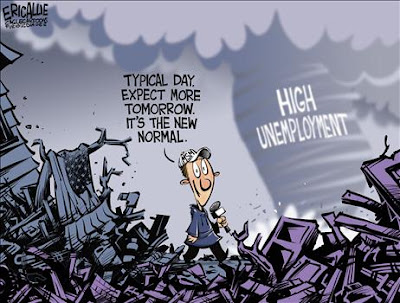 Employers added no net jobs in August, while unemployment rate was unchanged at 9.1 %.” The New York Times blasts: “U.S. Showed 0 Job Growth in August; Rate Stays at 9.1%.” But equally apt would be: “Obama’s reelection prospects nose-dive.” Given that we are, for the first time in 11 months, not creating any new jobs, the outlook for a double-dip recession is real. And, moreover, even if we do not slip into consecutive quarters of negative growth (the technical definition of “recession”), we are certainly heading in the wrong direction. According to Matt McDonald, a former Bush official and now a business consultant, in order to get to 8 percent unemployment by Election Day we would need 270,000 new jobs each month. To get to 8.5 percent we would need to create 215,000 jobs monthly. Just to inch down to 9 percent would require 159,000 jobs every month. But, given Obama's anti-jobs policies, getting back down to 9% will be an impossibility. ﻿
﻿﻿﻿
﻿ Not surprisingly, the GOP contenders pounced. Mitt Romney put out this:
Today’s disappointing unemployment report is further proof that President Obama has failed. President Obama oversaw an economy that created zero jobs last month and that is unacceptable. In order to change the direction of this country, we need to change presidents. Americans need a conservative businessman to get this economy moving again, not career politicians. That is why I am running. Next week, I will lay out my specific plan to put America back to work.”

A spokesman for Texas Gov. Rick Perry sent out an e-mailed saying: “Today’s unemployment numbers continue to demonstrate the failed leadership of President Obama in turning our economy around and creating jobs. Governor Perry has a track record of job creation and he will continue talking about his ideas to get America working again.”﻿
﻿

Jon Huntsman has this: “Two days after I offered a plan with serious solutions that would create jobs and get our economy going, we learn of yet another month with zero job growth. There is no clearer sign that the President has failed and the theatrics around his far-too-late jobs speech tonight demonstrates that he has no real plan to change course. In a country with 307 million people, zero job growth is unfathomable. It’s time for America to compete again and it’s time for a new President.”﻿
﻿
You do get the sense that anyone of these guys would be better at this than the president. And, in fact, the policy differences among the GOP contenders, I suspect, will be small. It will come down to a contest as to who is the most authentic, the most electable and most capable free-market conservative.

And frankly, if the GOP can’t win back the White House with unemployment at 9 percent, a mammoth deficit and the threat of tax hikes coming from the incumbent president, the party might want to go fishing. It will take skill to mangle this race. That is still, of course, a distinct possibility.