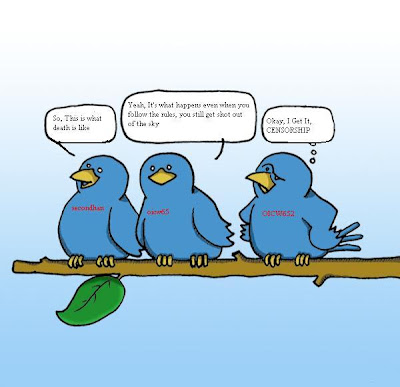 I have a growing feeling of unease that Twitter is actively censoring the discussion of all things conservative, or, shall I say, All thing conservative produced and published by this, soon-to-be Suspended blogger, Bobby Greer, Me.﻿
﻿

Less than three weeks ago I had gone by the user name of OICW65. This has been my name since the beginning of my online digital life, so it was hard for me to understand why my twitter account had been suspended for what I see everyone do on twitter, TWEET.

My journey into the world of violated rights and corporate policy were about to heat up to a whitehot back and forth between the first amendment, company policy and activity rules. In order to make my case, I’ll disclose all transmissions between myself and twitter and allow you, the American twitter account holder decide if I’m guilty of what they claim or, if I'm the victim of a violation of ones First Amendement Rights.


Here is a transcript of some of what IS happening:

Description of problem: My twitter was suspended for no reason, I followed your riles, I had more followers than what I followed, I didn't un-follow anyone. people were re-tweeting my updates and they were talking, I didn't tweet anyone that was not following, So, WHAT DID I DO WRONG??? This is the second account you've suspended without telling me anything, or, AM I BEING CENSORED??


Aug, 14,2011 I was suspended from twitter for the second time in as many weeks. My first account oicw65 was suspended for I believe aggressive following, but my second account, I was not following aggressively, I had more followers than I followed, I was not using any automated bots or auto follow, my first ten people that I followed were friends and as more found me and followed, I would follow them back. I tweeted three of my blog post and did not go outside that. So by the rules set forth by twitter, I did not violate any of these written rules. Why are my first amendment rights being violated, why am I being censored? Or does twitter censor conservative that are black? I as this question this way because this is twice this month I been suspended without any warning or such as this later case, doing anything wrong. Or, is it twitters policy to censor conservatives, and if this is true, then why only myself?

In the event that there are any twitter users that are un-familiar with twitters rules, I've included them with this post and I went further and highlighted interesting rules that I have left comment to, So without any additional delay:

The Twitter Rules
Our goal is to provide a service that allows you to discover and receive content from sources that interest you as well as to share your content with others. We respect the ownership of the content that users share and each user is responsible for the content he or she provides. Because of these principles, we do not actively monitor user’s content and will not censor user content, except in limited circumstances described below.


In order to provide the Twitter service and the ability to communicate and stay connected with others, there are some limitations on the type of content that can be published with Twitter. These limitations comply with legal requirements and make Twitter a better experience for all. We may need to change these rules from time to time and reserve the right to do so. Please check back here to see the latest.


• Impersonation: You may not (impersonate) others through the Twitter service in a manner that does or is intended to mislead, confuse, or deceive others


• Trademark: We reserve the right to reclaim user names on behalf of businesses or individuals that hold legal claim or trademark on those user names. Accounts using business names and/or logos to mislead others will be permanently suspended.


• Privacy: You may not publish or post other people's private and confidential information, such as credit card numbers, street address or Social Security/National Identity numbers, without their express authorization and permission.


• Violence and Threats: You may not publish or post direct, specific threats of violence against others.


• Copyright: We will respond to clear and complete notices of alleged copyright infringement. Our copyright procedures are set forth in the Terms of Service.


• Unlawful Use: You may not use our service for any unlawful purposes or in furtherance of illegal activities. International users agree to comply with all local laws regarding online conduct and acceptable content.


• Misuse of Twitter Badges: You may not use a Verified Account badge or Promoted Products badge unless it is provided by Twitter. Accounts using these badges as part of profile pictures, background images, or in a way that falsely implies affiliation with Twitter will be suspended.


• Serial Accounts: You may not create serial accounts for disruptive or abusive purposes, or with overlapping use cases. Mass account creation may result in suspension of all related accounts. Please note that any violation of the Twitter Rules is cause for permanent suspension of all accounts.


• Username Squatting: You may not engage in username squatting. Accounts that are inactive for more than 6 months may also be removed without further notice. Some of the factors that we take into account when determining what conduct is considered to be username squatting are:


o the number of accounts created


o creating accounts for the purpose of selling those accounts


• Invitation spam: You may not use Twitter.com's address book contact import to send repeat, mass invitations.


• Selling user names: Unless you have been specifically permitted to do so in a separate agreement with Twitter, you agree that you will not reproduce, duplicate, copy, sell, trade or resell the Services for any purpose, where "Services" is defined as follows: Your use of Twitter’s products, services and web sites (referred to collectively as the “Services” in this document and excluding any services provided to you by Twitter under a separate written agreement) is subject to the terms of a legal agreement between you and Twitter.


• Malware/Phishing: You may not publish or link to malicious content intended to damage or disrupt another user’s browser or computer or to compromise a user’s privacy.


• Spam: You may not use the Twitter service for the purpose of spamming anyone. What constitutes “spamming” will evolve as we respond to new tricks and tactics by spammers. Some of the factors that we take into account when determining what conduct is considered to be spamming are:

o If you have followed and unfollowed people in a short time period, particularly by automated means (aggressive follower churn); Didn't do

o If you repeatedly follow and unfollow people, whether to build followers or to garner more attention for your profile; Didn't do

o If you have a small number of followers compared to the amount of people you are following; Not in this case

o If your updates consist mainly of links, and not personal updates; the links I tweeted all have personal updates, such as: Blogs Title, and relevent content to the title.

o If you post misleading links; Not in this case

o If a large number of people are blocking you; How would I know? It's nearly impossible to respond to everybody that shots you a tweet and have any kind of a life.

o The number of spam complaints that have been filed against you; No one complained to me so once again, How would I know?

o If you post multiple unrelated updates to a topic using #; Never posted to any trends or popular topics, and I'll tell on myself one more time, I did repetedly tweet the same tweet to multible people, with the OICW65 account.

o If you post multiple unrelated updates to a trending or popular topic; Okay; How many ways can they accuse one of the same damn thing?
o If you send large numbers of duplicate @replies or mentions; This one means, You aren't allowed to respond to tweets or mentions, like, Tell someone Thank you for the RT

o If you send large numbers of unsolicited @replies or mentions in an attempt to spam a service or link; Not in this case.

o If you add a large number of unrelated users to lists in an attempt to spam a service or link; I don't have any list

o If you repeatedly post other users' Tweets as your own; Can't agree with someone elses tweet in a re-tweet

o If you have attempted to "sell" followers, particularly through tactics considered aggressive following or follower churn; I DON'T SELL ANYTHING, TO ANYBODY

o Creating or purchasing accounts in order to gain followers; Buy Followers? WOW, Can you do that?

o Using or promoting third-party sites that claim to get you more followers (such as follower trains, sites promising "more followers fast," or any other site that offers to automatically add followers to your account); Don't have or have I ever had any third party apps.

o If you create Points of Interest to namesquat or spam. Nmaesquat? what the Fu*k is that?

• Pornography: You may not use obscene or pornographic images in either your profile picture or user background That's discusting.
Your account may be suspended for Terms of Service violations if any of the above is true. Please see our help pages on Following Best Practices and Automation Rules and Best Practices for a more detailed discussion of how the Rules apply to those particular account behaviors. Accounts created to replace suspended accounts will be permanently suspended.

Accounts engaging in any of these behaviors may be investigated for abuse. Accounts under investigation may be removed from Search for quality. Twitter reserves the right to immediately terminate your account without further notice in the event that, in its judgment, you violate these Rules or the Terms of Service.

So, don't you fellow twitter users, don't get caught, or labeled like I did, because, sometimes as with the OICW65 account, People with bad fitting, tight ass black suites come-a-knocking, and it ain't fun. Other than that, I love the people that I have met on twitter and will say it out loud.

I am in the process of ending RACE RELATIONS and Evolving into something a bit more in my control, like web site and a newsletter and away from twitter, facebook and Linkedin, their all in the crapper for the government. And Please, Feel Free To Tweet This Post, I Employ You.