Has anyone seen This Man? Moammar Gadhafi 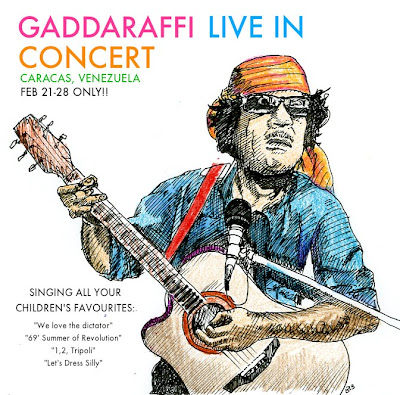 He is nowhere to be found as his 42-year rule of crumbles. Months of NATO air strikes have left his Bab al-Aziziya compound in Tripoli largely demolished. Most of his security forces fled or surrendered when rebel forces rolled into the capital Sunday night and took control of most of the city.﻿ ﻿ ﻿

Rebels said that three of Gadhafi's sons had been arrested. But one report said that his eldest son, Mohammed Gadhafi, was reported to have escaped Monday, according to the Libyan ambassador to the United States.Saif al-Islam Gadhafi, who is wanted on war crimes charges by the International Criminal Court in , had been reported captured on Sunday along with two of his brothers. Luis Moreno-Ocampo, the ICC's chief prosecutor, had said Sunday that he would seek Saif al-Islam Gadhafi's extradition following his capture. But Saif Islam turned up early Tuesday morning at the Rixos hotel, where about 30 foreign journalists are staying in Tripoli under the close watch of regime minders. He then took reporters in a convoy of black, armored SUVs on a drive through parts of the city under the regime's control. Asked about the warrant for his arrest, Saif al-Islam told reporters, "To hell with the ICC." ﻿
﻿
"The real moment of victory is when Gadhafi is captured," Mustafa Abdel-Jalil, head of the rebel National Transitional Council, told a news conference in the opposition's de facto capital of Benghazi, hundreds of miles east of Tripoli. He said the rebels have no idea where Gadhafi is and whether he is even in Tripoli. An Obama administration official said the U.S. had no indication that Gadhafi had left Libya.
The official said U.S. officials and NATO partners had not been in contact with Gadhafi during the siege on Tripoli. However, the official said U.S. and NATO representatives, as well as Libyan rebels, had been in contact with people around Gadhafi, mostly those looking for a way out.﻿
﻿
﻿
﻿A mood of joy mixed with trepidation settled over the capital, with the rebels still fighting pockets of fierce resistance from regime loyalists firing mortars and anti-aircraft guns. Rebel spokesman Mohammed Abdel-Rahman, who was in Tripoli, said the "danger is still there" as long as Gadhafi remains on the run.

Gadhafi's forces remained active, firing off a short-range Scud missile Monday near Sirte, Gadhafi's hometown and one of the few remaining cities still under his control, said U.S. military officials, who spoke on condition of anonymity to discuss military operations. It was unclear where the missile landed or whether anyone was hurt.
NATO pledged to keep up its air campaign until all pro-Gadhafi forces surrender or return to their barracks. The alliance's warplanes have hit at least 40 targets in and around Tripoli in the past two days -- the highest number on a single geographic location since the bombing started in March, NATO said.
A day after the rebels rode into the city of 2 million, the situation remained volatile. Even though rebels claimed they were in control of most of Tripoli, they still appeared to be on the defensive, ducking for cover during frequent clashes with regime fighters. Throughout the day, the rebels sent reinforcements to the city from the north, south and southeast, and a rebel field commander said more than 4,000 fighters were part of the final push to bring down the regime. 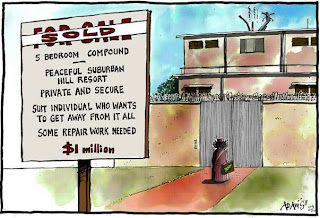 Libyan commandos fighting Gaddafis forces came close to capturing the toppled leader on Wednesday when they raided a private home in Tripoli where he appeared to have been hiding, Paris Match magazine said  today. A unit which was coordinating intelligence services for Arab states and Libyan rebels, said on its website that these services believed Gaddafi was still somewhere in the Libyan capital.﻿
﻿
The opinion is split as to whether the arrest warrants make a negotiated settlement with Gaddafi regime more or less likely. Colonel Gaddafi “personally ordered attacks on unarmed Libyan civilians,” in which armed forces shot demonstrators, fired heavy weapons on funeral processions and “placed snipers to kill those leaving mosques after prayers,” during the first weeks of the Libyan uprising, prosecutor Luis Moreno-Ocampo said. Mr. Moreno-Ocampo began investigating the situation in Libya after the United Nations Security Council referred the case to the court. The Court’s decision coincides with the 100th day of NATO operations in Libya.﻿﻿
﻿﻿

As for Moa; He'll turn up somewhere, or he'll continue to pursue his budding career in the entertainment industry. So, We'll keep an eye out for you Moa.
Posted by Bobby Greer at 10:07 AM