Is This Gadhafi's Future? 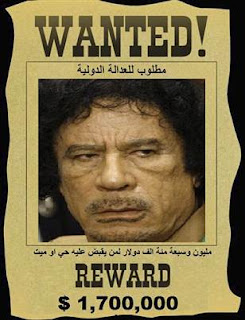 Finally, the Libyan revolution ended the way it was supposed to. “A few sharp victories, some conspicuous acts of personal bravery on the Patriot side and a colorful entry into the capital,” as British novelist Evelyn Waugh might have put it. That was the Western policy for the war — except that the war went on longer than it was meant to, and it might not be over yet, either. On Monday, the rebels reached Green Square
and declared victory. On Tuesday, Saif al-Islam Gaddafi, the regime’s dauphin, was driving around in an armored convoy, declaring that the rebels had been drawn into a clever trap. On Thursday, the rebels claimed to have Gaddafi surrounded. We’ll see what the weekend brings.


But then, that’s the problem with wars and revolutions: They have a way of diverging from the policy and confounding the planners. They continue even when they are supposed to be over. They spill into other areas and lead to new conflicts. Even wars that end with solemn surrender ceremonies and elaborate peace treaties sometimes have unexpected afterlives. The War begat the Second World War, the Second World War begat the Cold War, the Cold War begat the Korean War, and so on.
Posted by Bobby Greer at 3:21 PM